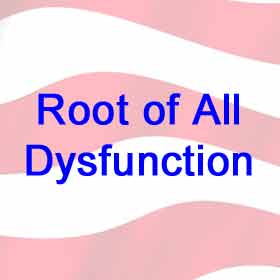 Root of all Dysfunction

Dysfunction is ultimately the result of individuals making choices with harmful consequences.  As I see it, just two states are at the root of all bad choices, all dysfunction: ignorance and emotional immaturity.

Ignorance should be obvious: when we lack awareness of all relevant facts, we tend to make assumptions that turn out to be false.  This in turn leads to choices with consequences, often regrettable, that we didn’t foresee.  Making good choices requires a commitment to being fully informed, and a willingness to make frequent course corrections when relevant new information becomes available.  Taking personal responsibility for being fully informed requires actively seeking out reliable information sources and developing the critical thinking skills that help you understand what you have learned and be aware of what you may not know.

Since ignorance is a part of the fundamental human condition – no one is omniscient, all knowing and all seeing – whatever you think you know is only part of the full picture, just a perspective, and nothing will ever change that.  However, some perspectives are more whole and complete than others, and it is your responsibility to move your awareness in that direction.

Ignorance and emotional immaturity –  the Root of all Dysfunction.

There is a reason why anger is one of the seven deadly sins – it puts the primitive (animal) brain in control and shuts out the capacity for human rational thought.  Passive aggressive forms of anger – resignation and cynicism – can be even more insidious.  A better understanding of how the brain processes emotional upset and rational thought can pay big dividends.

In 1995 the book “Emotional Intelligence” was published – describing the full range of expression along the animal – human spectrum and how to guide children toward adulthood on the human side of that spectrum.

Emotional Intelligence can be learned.  To a large degree, it determines an individual’s lifelong degree of success, both in career and in personal relationships.  Teaching Emotional Intelligence by integrating lessons and case studies into traditional K-12 course curricula should be a priority – we are shortchanging our children’s future otherwise.