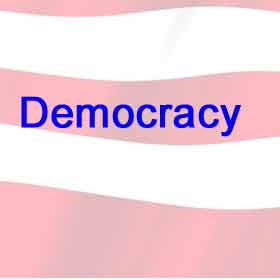 A government of the people, by the people, for the people meets the needs of, ideally, everyone.   We need a Democracy that works.

A Democracy that works

Democracy only truly works to the extent that voters make fully-informed well-reasoned choices.  Understand that the ultimate goal is creating and supporting strong social structures that meet all fundamental needs across all social strata; and maintaining a strong, efficient and productive infrastructure – especially our human infrastructure.

After all, a nation is a complex system and its people are the most critical part of the infrastructure that enables efficient national productivity.

Some may remember John Forbes Nash Jr, a Nobel-prize winning mathematician and paranoid schizophrenic, who was the subject of the movie “A Beautiful Mind”.  He worked on the economic application of game theory showing, in part, that the greatest net benefit is not attained when each participant acts from a context of pure self-interest.  I think of it as the mathematics of community.  Context Rules!

The same principles apply to government.  The world is a better place when people and organizations work together to maximize net benefit, work together to bring to reality what it is possible to create for the long term benefit of all.  This is democracy consistent with the fundamental Christian context – “Love One Another”.  This is democracy consistent with the fundamental Islamic context – Live from a context of community.   This is a Democracy that works.

When individuals and organizations choose as a single over-arching principle a context of pure self-interest – like greater personal profit or lower personal taxes – this often leads to manipulative tactics and choices harmful to others.  I think of this as the “I Want” syndrome.

Pure self-interest as a context for public policy, the “I Want” syndrome, implemented by powerful minorities for their own benefit, is a core reason that the distribution of wealth in America, and the ownership of the engines that create wealth, continues to concentrate in the hands of the few.

“I Want” and “I Don’t Want” are the rationales of four year olds.  When adults use a four year old’s rationale to craft public policy, the result is predictably destructive.  In a four-year-old “I Want” is an appropriate level of emotional maturity.  In adults, acting from a context of “I Want” for choices affecting the public arena, is not.

The world is an immensely complex system, with pervasive interrelationships that are difficult to understand.  I really don’t think I need to provide examples to show how even well-meaning choices – let alone clearly self-serving choices – have had far-ranging socially-harmful consequences.   Simple-minded perspectives lead to destructive choices.

In the IT world, Systems Analysis has been a core discipline in the design of automated systems that work across the full range of real-world circumstances.  Social Scientists study factors that impact human behavior.

The application of Political Science is all too often oriented toward the acquisition of power for one ‘side’ and the reduction of the power of the ‘other side’.   Glaringly missing is a context of public benefit.

It is time for the social scientists and systems analysts to play a much greater role in the crafting of public policy – assuming they are chartered to balance the maximizing of public benefit with minimizing harmful impacts on any individuals or groups.  This would support a Democracy that works.

Maximizing value, not profits; Investing in our human infrastructure with training, health care and productive employment; this is the true rising tide that lifts all ships; this is what truly serves pure self-interest.

Energy is not to be wasted in opposition – but spent only in creation.  Such is love.