Big Mac Sales is a new seller on Reverb.  This may be his first review. I would have given him Five Stars, were it not for the serious (and correctable) issues in the packaging of the guitar for shipment.

The guitar in the photo on Reverb, shown immediately below, was in excellent shape.  From my experience, he seems to be selling quality product that meets or exceeds his description.  The one time I messaged him, his response was prompt.  I would have given him Five Stars, were it not for the irresponsibly poor job packing the guitar for shipment.

Zac is fortunate the guitar was not more seriously damaged in transit, and suffered only a few nicks/scratches.  I hope this critique is received in the spirit in which I offer it – as an opportunity to do better next time.

My first impression, as the photos show, was of the shabby package.  Upon receiving it from the Postal clerk, I felt the guitar shifting around – side-to-side, top-to-bottom.  This invites shipping damage.  Of course, blue paper painter’s tape is never appropriate to seal a box for shipping.  I have attached a video below showing the process of unpacking the guitar.  As shown at the end of the video, and in the still image of the just opened box, the minimal packing material around the guitar was doing little to protect the instrument, and was likely in disarray from how it was arranged when the box was sealed, as nothing was used to hold it in place.

To my way of thinking, the guitar should have – at a minimum – been wrapped in the kind of bubble wrap with large bubbles, covering top, bottom and all around.  Additional packaging to prevent it from shifting in the box would be prudent, as would placing it in a large plastic bag to protect against water hazard during shipping.

The guitar description said ‘no nicks’, which I suspect was true before shipping.  It is not true as received.  As the photographs show, there are nicks at the top of the neck, along the bottom and lower edge of the guitar, and on the top lower surface.

The guitar was shipped via USPS Parcel Select, which may account for the low shipping costs.  I would advise charging enough to cover the cost of adequate protective packaging.

The defects on the guitar as received are minor; I would not want to return the guitar because of them.  The point is they were completely avoidable.  The seller was very fortunate greater damage was not incurred in transit.  Cracking / crushing damage could have occurred. This is the photo of the Goya guitar shown on Reverb.  It looks to be in excellent shape.

Above is a video of the Guitar being unpacked. 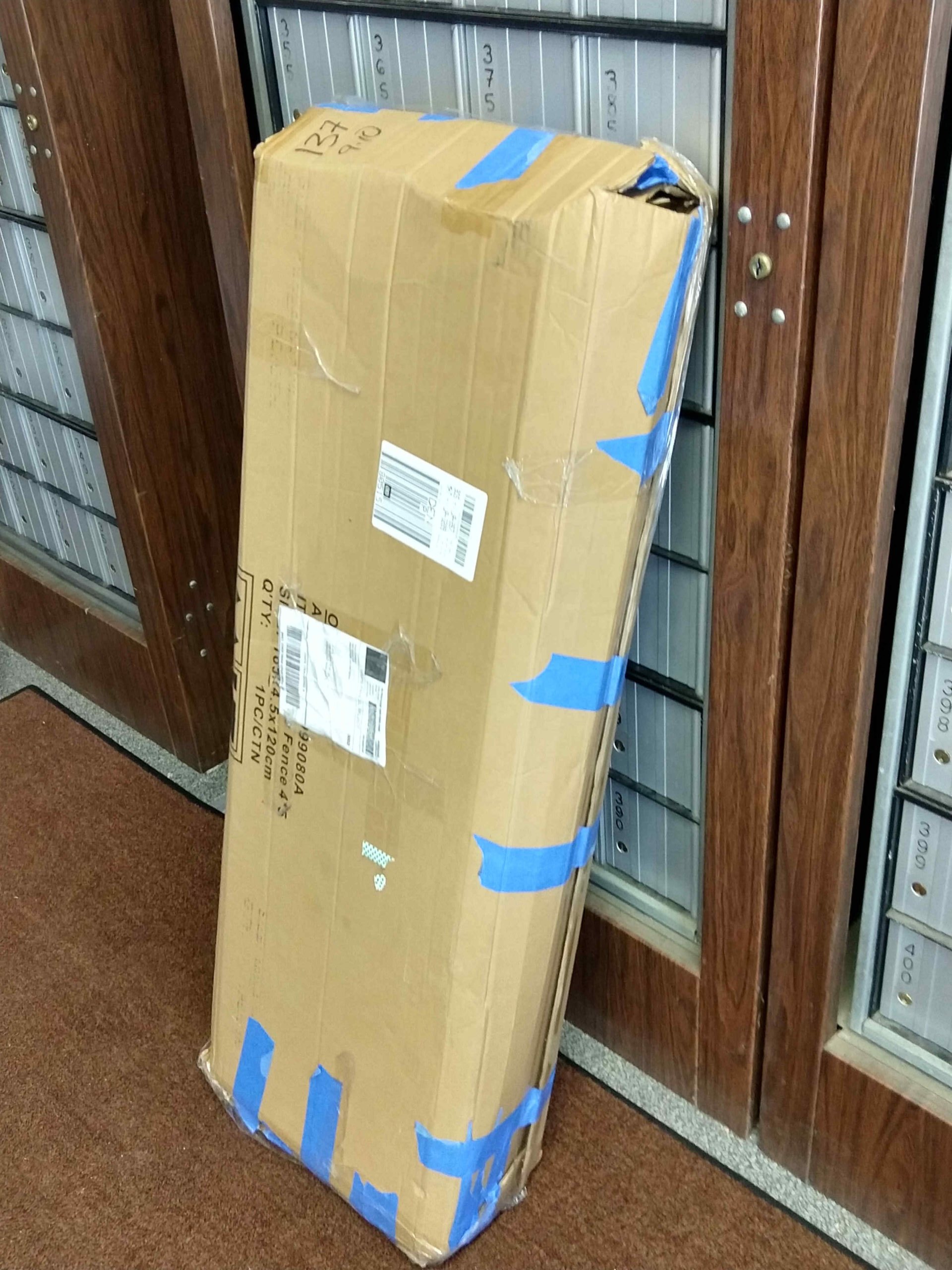 This is a photo of the package as received from the postal clerk in the post office.  The cardboard is not a proper box.   Blue painters tape is never appropriate for sealing shipping packages. 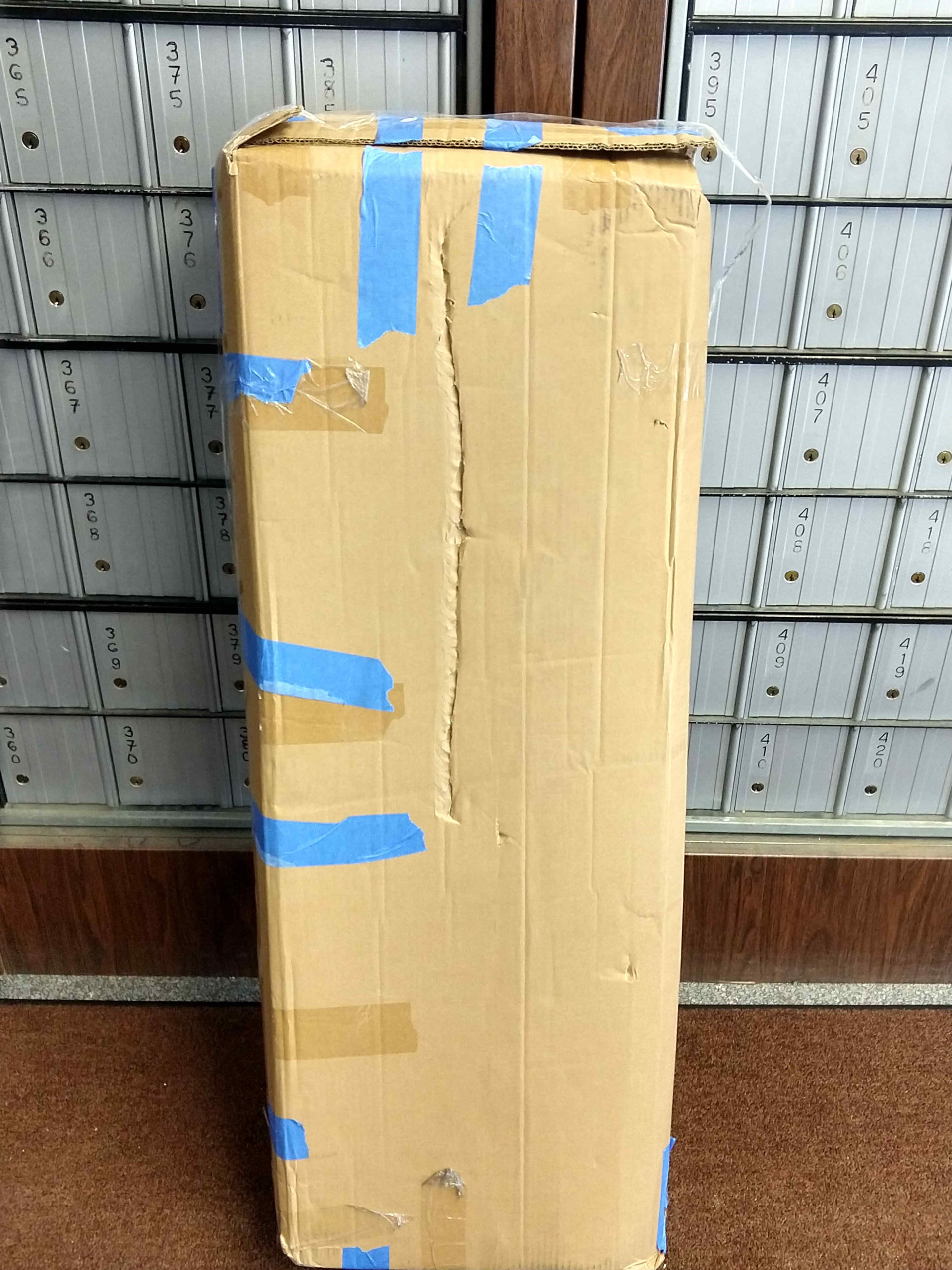 This is the other side of the package as received from the postal clerk.  Note that the blue tape at the top has torn, unsealing the top edge.  The long scar down the box was likely incurred during transit. 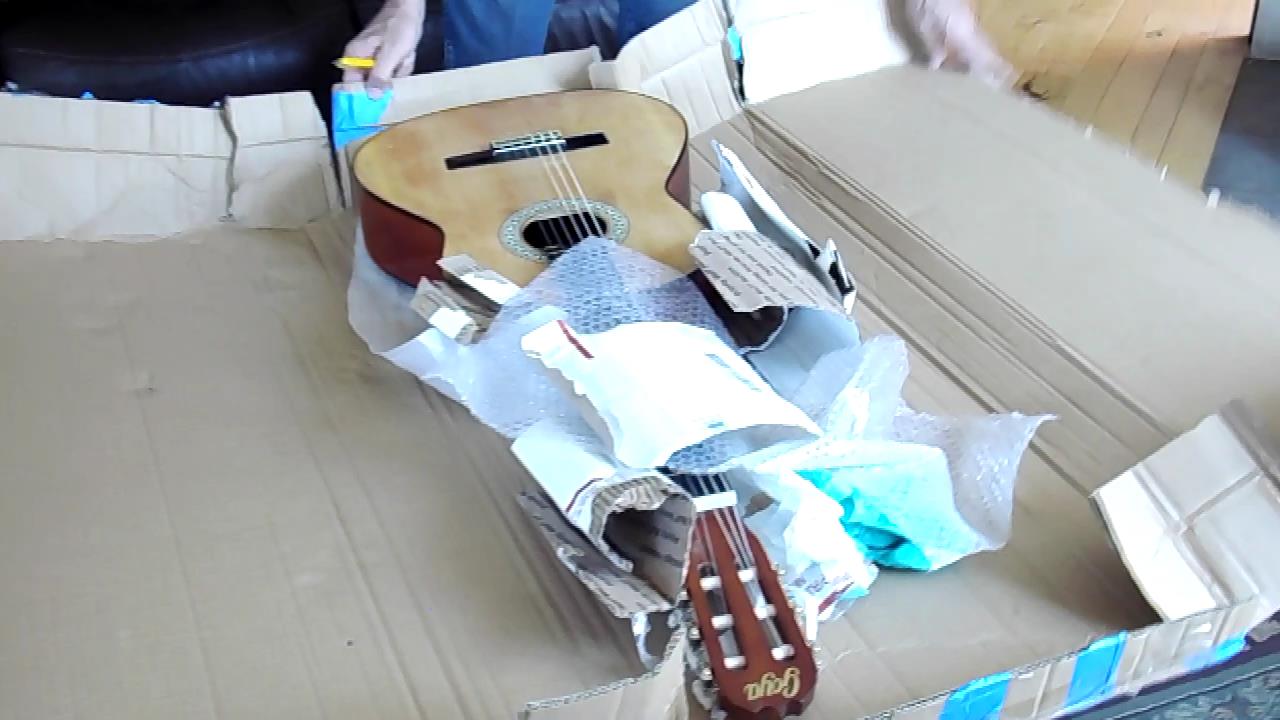 This is the state of the packaging seen immediately upon opening the box.  It looks like some of the cardboard had been wrapped around the neck (it could have been taped to make a tube, to keep it in place), and the bubble wrap perhaps placed over the body of the guitar.  Nothing stayed in place and was doing little to protect the guitar.   As the video shows all of this was simply picked away. 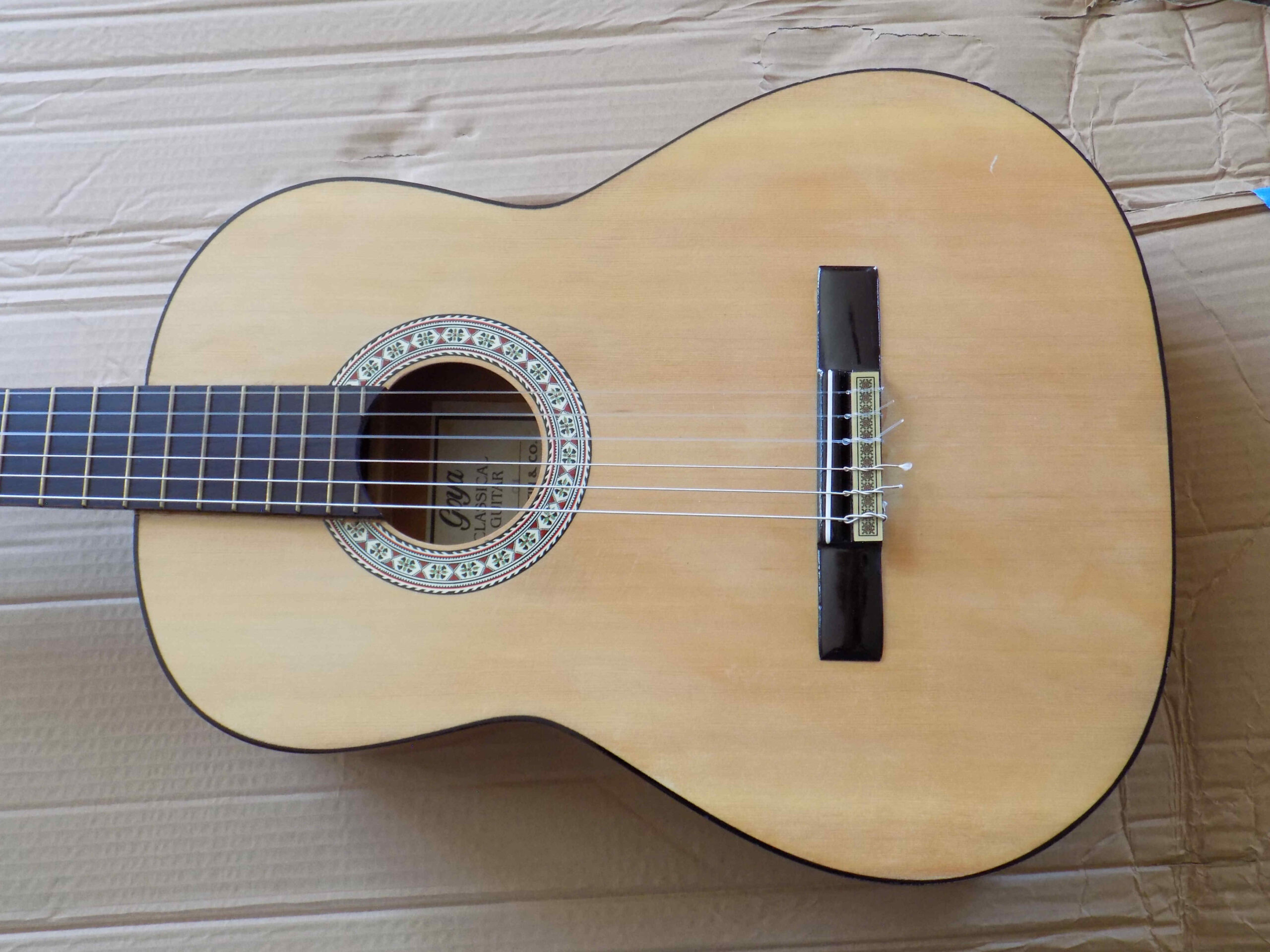 This and the following photos were all taken immediately after unpacking it.  Note the scratch above and to the right of the bridge.  This scratch does not appear in the Reverb photo above. 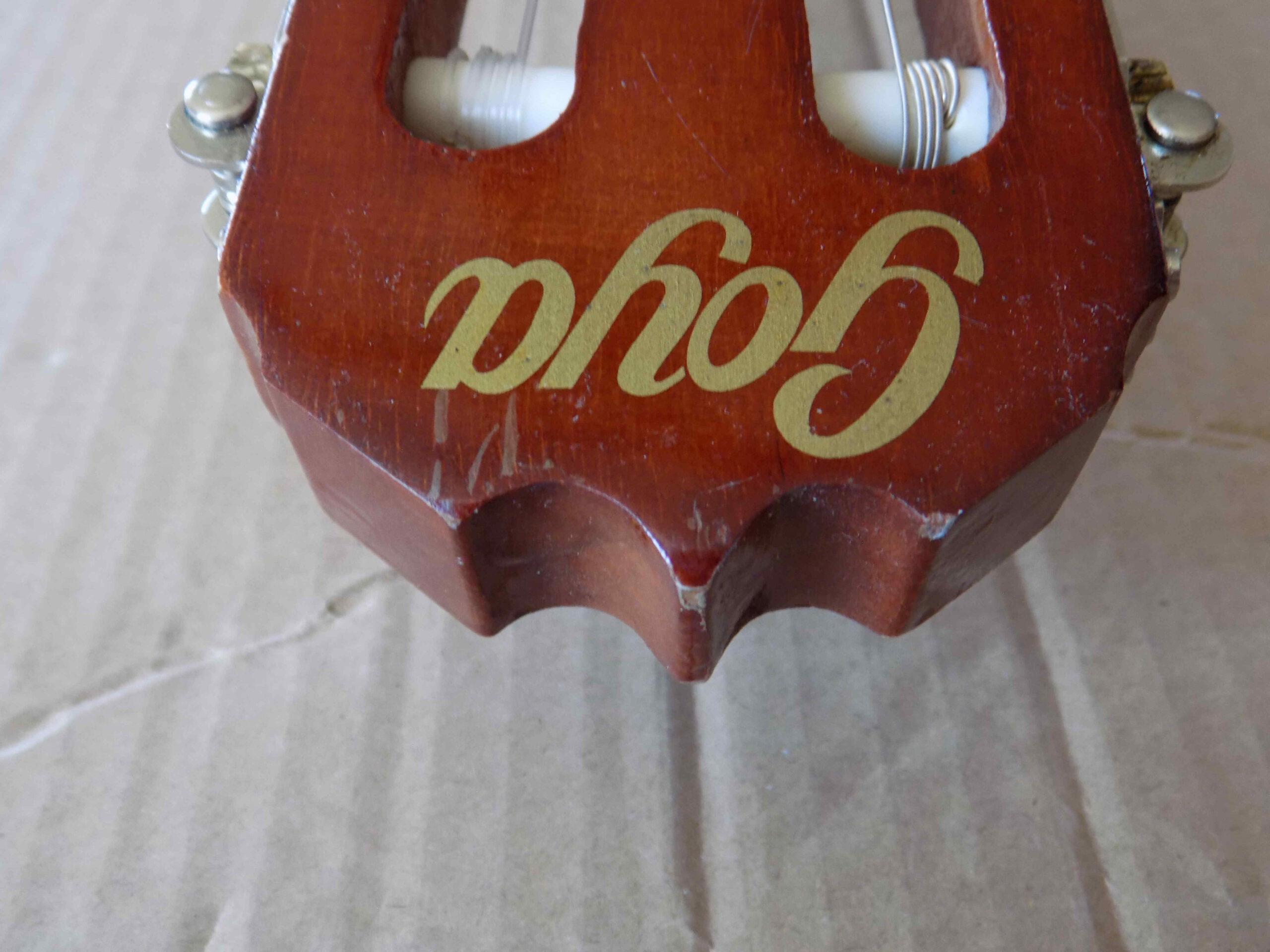 Minor scratches on the edge of the head. 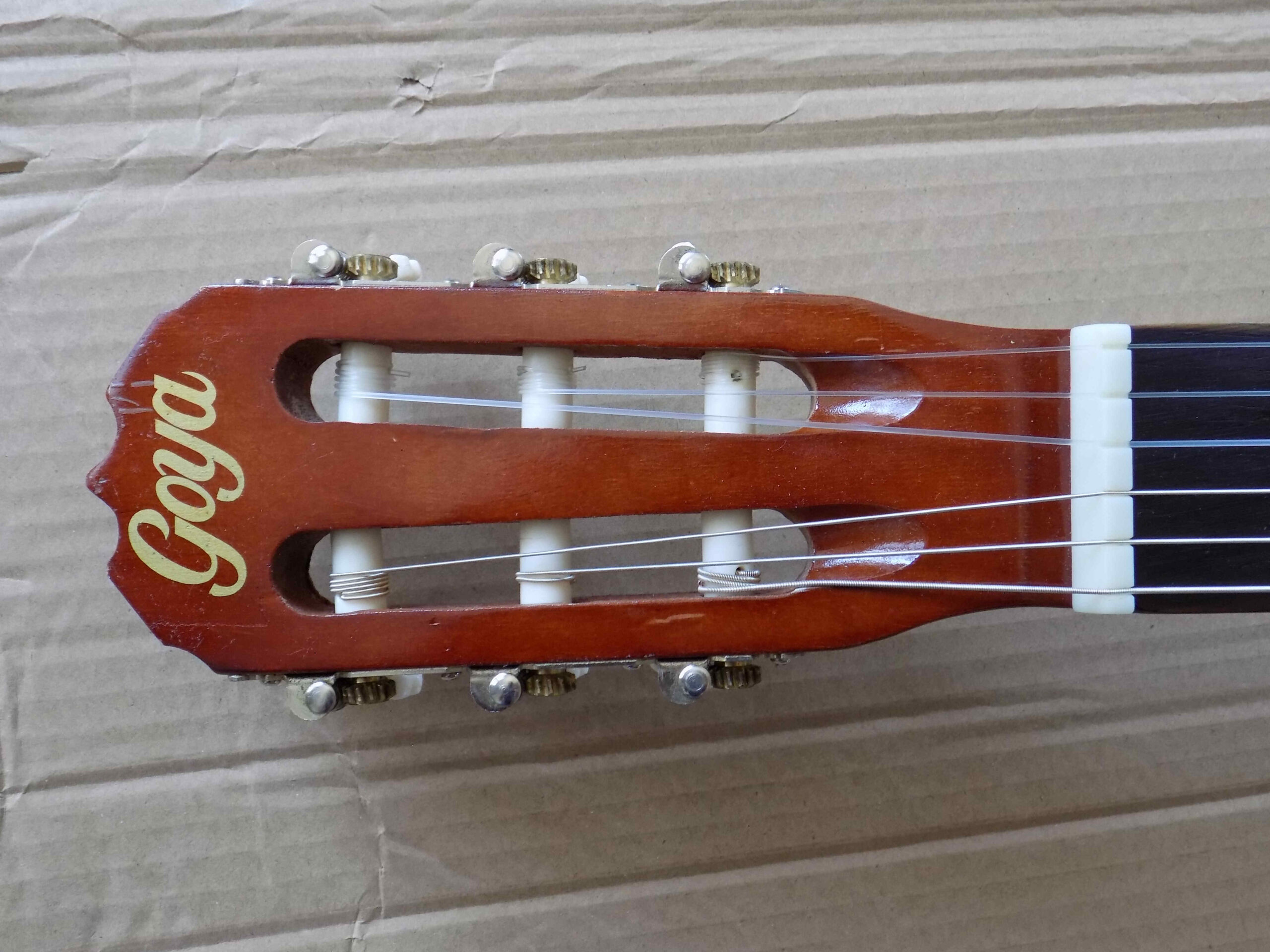 Minor scratches on the head. 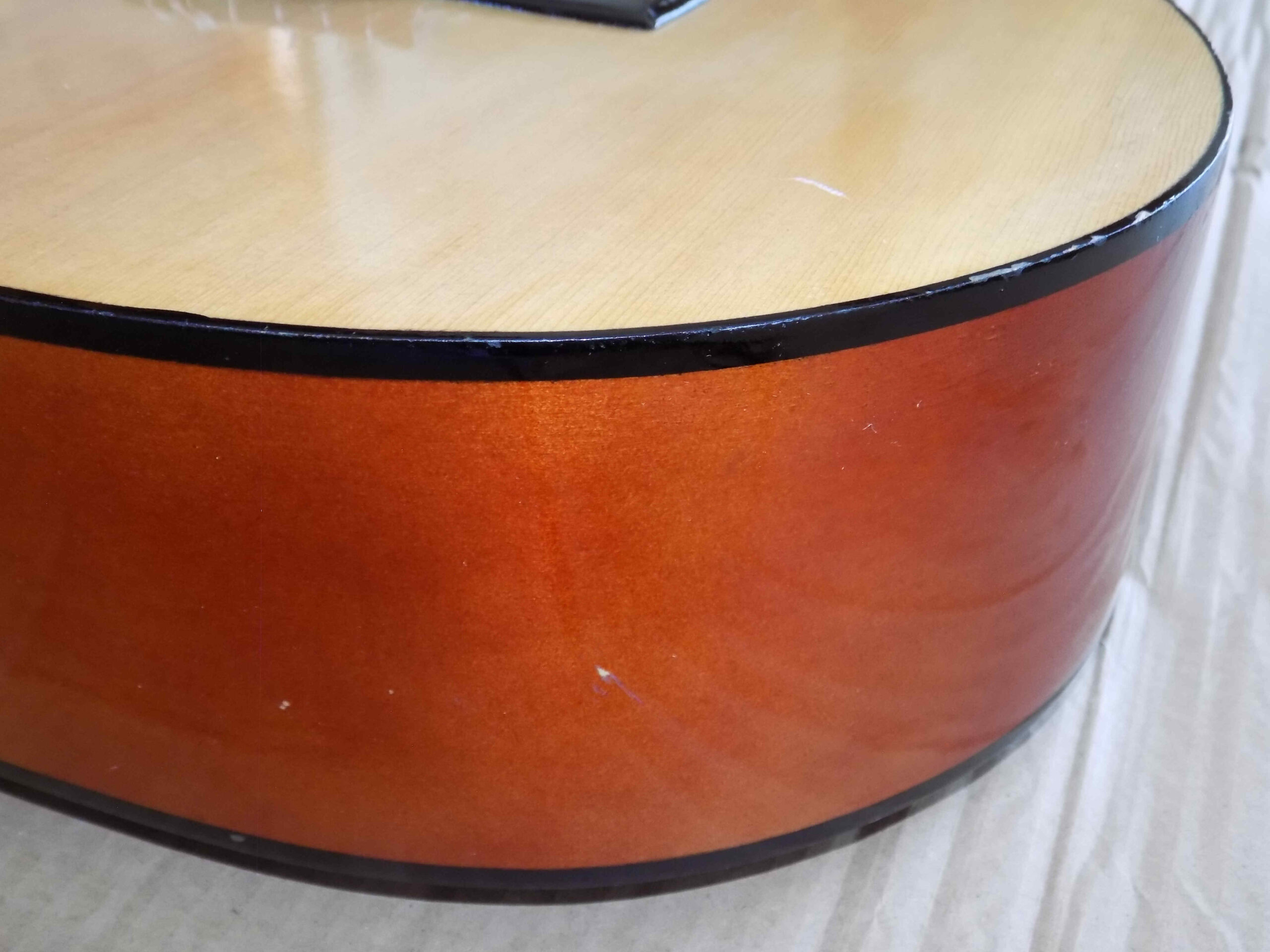 The scratch below and to the right of the bridge, minor nicks on the edge and bottom.